The Age Of Stupid review 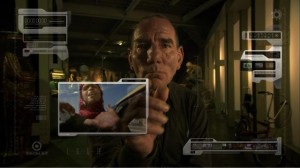 Last night, Mr Green and I watched the “Age of Stupid“.

In case you haven’t heard of it, the film, directed by Franny Armstrong, stars Pete Postlethwaite as a man living in 2055, watching archive footage from 2008 and asking “Why didn’t we stop climate change when we had the chance?”

The Age of Stupid is part drama, part documentary and it really does leave you feeling a bit ‘stupid’.

We have so much evidence to show that climate change is happening, yet many of us are in denial or don’t bother to do anything because we blame China / corporations / America / our neighbours. The Age of Stupid is a call to action and shows, with startling effects, the results of human greed and lack of personal responsibility.

The Age of Stupid follows seven people from around the world:

Friends who had watched The Age of Stupid told me it was brilliant, remarkable or thought provoking. They said it  made them feel angry, depressed or sad. The remarked it was engaging, a wake up call or alarming and one wasn’t sure whether he felt motivated or condemned.

It is that sort of film – one to evoke a myriad of emotions. At the end of it I too wasn’t sure whether I felt motivated or condemned, but I think that’s the point. The film makes you feel something and as far as I can make out, if that feeling leads to positive action, then Franny has achieved her goal.

The Age of Stupid is being shown around the world at various locations. Afterwards there is the chance to discuss with others what you can do. But if you can’t make it to a cinema screening you can download the film to watch at home.

If you’ve watched it and feel full of gloom, or full of bloody minded optimism, what CAN you do?

Have you seen the Age of Stupid? How did it make you feel and have you made any lifestyle changes since watching it?