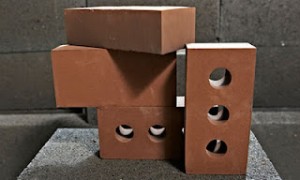 Have you ever thought about the environmental impact of your home?

I’m not talking about the running of it – electricity, water and so forth, but the impact of the building itself.

According to DEFRA, the construction, demolition & excavation (CD&E) sector generates more waste in England than any other sector.

The majority of waste from the construction industry is made up of bricks, concrete and wood. These products have either been damaged, are over-ordered or are unused for some reason.

According to a BBC report, the construction industry creates 36 million tonnes of landfill waste each year: that’s three times more than all the domestic waste generated by the nation’s 21 million households! If standard-size skips filled with this rubbish were laid end-to-end, they would form a two metre high wall stretching round the equator one and a half times.

If we focus on bricks for a moment; the majority of house bricks in the UK are made from sand and clay with the addition of lime, iron oxide and magnesia [source: Wikipedia]. The mixture is moulded into brick shapes and dried in kilns. In some countries of the world cow dung is used to make bricks, whilst in others, mud is used.

Whilst not going as far as cow dung, Yorkshire water, in partnership with Encos, may have come up with a win-win solution in the form of human waste with their sewage bricks! They are turning ash from incinerated sludge (a bi-product of the waste water treatment process) and vegetable oil based binders into carbon negative house bricks. They are classed as carbon negative because the CO2 emitted in their manufacture is far less than the CO2 absorbed by the plants that make the binder.

The aim of the project is to not only to reduce Yorkshire Water’s landfill waste, but to reduce the environmental impact of construction by offering an alternative to traditional binders in bricks, such as cement. These binders are responsible for around five per cent of global carbon dioxide emissions.

The process could significantly reduce the environmental impact of the construction industry and also greatly reduce the amount of waste going to landfill. “We’ve got a revolutionary product, we use very little energy in making our products and use a binder which actually stores CO2 as opposed to emitting it,” says Encos chief executive, Mark Nichols.

Producing these bricks uses no water and creates no waste. It’s estimated that these bricks could result in a reduction of 120% greenhouse gas emissions compared to traditional clay bricks.

Jonn Brigg, innovation development manager at Yorkshire Water said, “We are always looking for ways in which we can make the best use of our waste to have a positive impact on our environment, and this project is a great way to reuse non-hazardous, incinerated sludge ash which has traditionally been sent to landfill. With new building regulations coming into force, home builders will need to reduce the embedded carbon cost of all new homes; the bricks and blocks will provide a perfect alternative to traditional house bricks.”

To find out more about how Yorkshire Water is using its waste to generate renewable sources of energy visit their website.