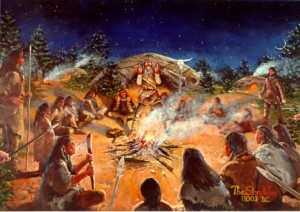 I discovered last night that this week is national storytelling week.

This reminded me of something that happened 3 years ago, when Little miss green was at school.

She was sent home with a book to read with me, which we dutifully did.

The story centred around a man and a boy. The man was very large; both tall and wide. We assume from the story that he wasn’t very friendly. This appeared to be based on nothing more than his looks and a quirky rhyme he used to repeat that sounded quite threatening in an amusing way.

The little boy in the story wasn’t very well behaved. He stole things that didn’t belong to him but instead of being made to live with the consequences of doing something that is morally wrong, he lived a life of luxury with the items he had stolen. At the end of the story, the man chased the boy who was stealing his things to try and get them back. Instead of getting them back, the little boy killed the man.

On the last picture, the boy and his mother, instead of looking concerned about what has happened, are looking rather pleased with themselves.

So, to recap we have a story built around

This book sent home from school found me struggling to understand the educational benefits of it. It wasn’t even a good vs evil story; it appeared to be one that endorsed some very negative behaviours like stealing, lying and being judgemental. Are these the qualities we want our children to read and learn about?

When you turn on the news and see stories about young criminals who show no remorse, terrorism or senseless killing maybe we should be going right back to our children’s early stories to see where these problems have originated.

Jack and the beanstalk

In case you haven’t guessed, I am referring to ‘Jack and the Beanstalk’, a story that we all know from our own childhood. One that just seems to be ‘accepted’ by society for what reason? Only that it has been around nearly 200 years as far as I can see.

Can you imagine writing a story with those themes now? It would be deemed as unfit for publication and politically incorrect!

It might sound over-the-top, but really, don’t we need to stop and think about the subliminal messages we force feed our children through the nursery rhymes and fairy tales we read them?
Nursery rhymes are littered with violence, judgement and fear – cutting off the tails of mice (three blind mice), children who are beaten until they cry (Tom Tom the Pipers Son) and instilling fear (of spiders in Little Miss Muffett) for example.

And then there are examples of appalling rhyming and badly written English such as the verse from Yankee Doodle:

“Father and I went down to camp,
Along with Cap’n Goodwin;
The men and boys all stood around
As thick as hasty puddin’.”

and how about the Fairy in Little Bunny FooFoo who says:

“I don’t want to see you
scoopin’ up the field mice
and boppin’ em on the head.
You disobeyed me three times, so now I’m gonna turn you into a GOON!”

Can you imagine how the child would get on in their English GCSE classes dropping their ‘g’s’ and saying ’em instead of ‘them’? (it was fun running the above verses through Spell checker; I can tell you!)

I do not believe for one minute in wrapping children up in cotton wool and ‘protecting’ them from some of the ‘real life’ situations they may find themselves in. I am all for stimulating the imagination, for nonsense rhymes that create laughter and for children believing in magic. I am opposed however, to filling the imagination with horrible images and terrifying figures. I despise senseless fear and superstition. Why is it that many children are afraid of the dark when their most primal ‘safe place’ (the womb) was in complete darkness?

We should use stories to portray *beautiful* images that carry love into the world. We should use the power of storytelling to instil positive character traits and behaviours and we should fill our children with a good self-image. (Instead of the sugar and spice and all things nice for the overweight adult who comfort eats perhaps).

Up until the age of 7, children will accept fantasy as reality; they cannot differentiate between real and ‘imagined’. Do we not *owe* it to our children to fill those vital foundation years with positive and uplifting messages?

There *are* some enlightened authors out there who have published inspiring, nurturing stories. Isn’t it time for us to replace some of the old, tired and damaging messages we give our children to create positive and inspired adults to take care of our world?

Let us teach love instead of fear, tolerance instead of judgement and a positive self image. Let us replace Miss Muffett with compassionate earth custodians and teach our children reverence and respect.

My daughter’s comment when she finished the book was ‘well that’s really stupid isn’t it – how can you grind bones to make bread. Bones don’t make bread; you need sugar, yeast, flour and water.’

How will you celebrate National Storytelling week this year? Put down the books, connect with your imagination and let me know how you get on …