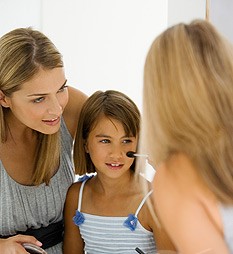 After my post the other week on Toxic chemicals in cosmetics, I was faced with my own toxic moment.

Little Miss Green had some money to spend and she bought a magazine.

On the front of the magazine were two freebies – some stickers and a lip gloss. I told her that I would not let her use the lipgloss and she would have to give it away.

Horrible Mum moment? Possibly, but I had three good reasons: first, I don’t think lipgloss is a suitable every day product for an eight year old. Second, I was concerned about the toxic ingredients. Third, this product had probably been tested on animals.

Once we got home and argument discussion ensued and I listed my reasons for saying No to the lipgloss, Little Miss Green suggested she gave it away to one of her friends which  I though was a good compromise.

Later on we researched some of the ingredients together and even I was shocked by what we found. This left me with a massive dilema on what to do with this product: give it to someone else’s child knowing full well what was in it; send it to a charity shop or put it in the landfill / burn it.

The ingredients of this child’s lip gloss included the following four toxic chemicals:

Most fragrance is derived from petrochemicals. Artificial fragrances contain solvents, aldehyes and benzene derivatives and other toxins which have been linked to birth defects and cancer.

No agency regulates the fragrance industry. Methylene chloride, a known carcinogen that also causes autoimmune disease, is listed as one of the 20 most common chemicals found in fragrance products in the 1991 EPA study.

Even though the FDA banned the chemical in all cosmetic and fragrance products in 1989. John Bailey, FDA, states there is no way to police the fragrance industry since it is unregulated and exempt from listing ingredients.

Methyl Paraben is linked to cancer, allergies, immunotoxicity and is restricted in US, Japan, European Countries and Canada. You’ve guessed it; this children’s lip gloss was made in China.

There are strong concerns over organ system toxicity

There are emerging concerns over neurotoxicity and Endocrine disruption.

Exposure to Proplyparaben can cause cancer, Developmental / reproductive toxicity, Allergies and immunotoxicity.

There are moderate concerns about endocrine disruption and organ system toxicity

And there are emerging concerns about ecotoxicology.

There are moderate concerns about developmental/reproductive toxicity, neurotoxicity and Organ system toxicity.

In addition this ingredient may be derived from animals and many derivatives used to create this colour are continuously tested on animals due to their carcinogenic properties.

Once I had explained about these ingredients and given a quick run down on what animal testing is, Little Miss Green burst into tears. She was so angry and frustrated although she understood why I had said no to using the lipgloss. She told me that I must not give it to another child to use and should burn it on the fire.

As a parent I was sad too. As a little girl she wanted that product and many of her friends are allowed to use things like that. I felt angered that these toxic, potentially dangerous products have been ‘normalised’ in our society and worse still, are aimed at children.

Next time you let your little Princess put on a bit of make up, or she insists on a make up party, check the ingredients first. Their ‘little bit of fun’ or ‘no harm’ moment might be causing them more harm than you think. You can find out more about ingredients with the cosmetics database.

As a green parent how do you deal with situations like this? Do you compromise?