Could you be vegan for a day? 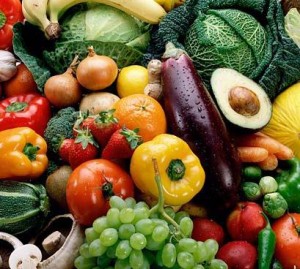 This week, Small Footprints is tantalising our taste buds with her Change the World Wednesday challenge.

She’s asked us to be vegan for a day…

Being a vegan is something I’ve toyed with the idea of many times, but never done.

I find it difficult to maintain my weight – I was erm, *blessed* with a fast metabolism. I get cold easily. I like high carbohydrate, high fat food and eat a lot of yogurt and butter.

As well as enjoying the calories and fat, I absolutely LOVE the taste. I honestly feel that low fat = low taste. As far as I’m concerned the more butter in a dish the better.

I was vegetarian for 20 years and always buy organic dairy products. I don’t eat honey or eggs so for many years the only animal products I was eating were the aforementioned yogurt and butter.

About a year ago I started to explore the thought of eating chicken again. I never thought this would happen to me! But it did and the cravings became stronger and stronger. I believe food is our medicine and that our cravings should be followed because they are there for a reason.

I eventually found locally reared, humanely slaughtered organic, free range chicken and tentatively re-introduced it into my diet. I can say in all honesty I look forward to my once or twice a week meal of chicken.

I also eat salmon once or twice a week and I feel much better for introducing these two foods.

At the moment an average day of food for me might go along the lines of:

So there’s a lot to do to switch to a vegan diet for me.

However, for one day I’m going to commit to it and see how I feel. I am not personally in favour of ‘fake’ foods. I can’t understand the whole ‘mock tuna’ idea – (let’s just call it butter bean purée for instance (no offence to the lovely Jennifer who shared the delicious sounding recipe with me some time ago)) or worse still the fake bacon and cheese by companies such as Redwood – if you want to eat these things isn’t it better to just eat them and be honest with yourself? I can understand these foods might be useful during a ‘transition’ time (I used to live on TVP and Quorn sausages when I was first veggie in my teens) but I prefer now a more wholefoods diet.

I can’t eat nuts or seeds due to allergies which is one of the main reasons I’ve never actually made the switch to a vegan diet. I can’t understand why someone would switch to a vegan diet and then take supplements because of lacking vitamins and minerals in their diet; it doesn’t feel right to me.

I believe Mother Nature provides us with all that we need but I think many have become disconnected from what is really good for us. I’m NOT saying that my diet is the right one, on the contrary there are lots of changes that I could make. I don’t eat as seasonally as I would like for instance. I’m aware how emotive the topic of our food choices can be. I don’t judge others for the decisions they make about their foods (Mr Green who was a “meat, more meat and potatoes” kinda guy when I met him (and thought vegetarians were weirdos LOL!) once went on a raw diet for a year – which proves people can radically change).

I admire people who have a principle and stick by it, but I believe in balance in all things – “don’t let a moral get in the way of a good idea” as a good friend reminds me when I’m wrestling with my conscience.

On Monday then, I shall be a vegan for a day and let you know how I got on.

What about you – what food choices do you make?  Check out the great food pyramid I found which illustrates a balanced vegan diet: 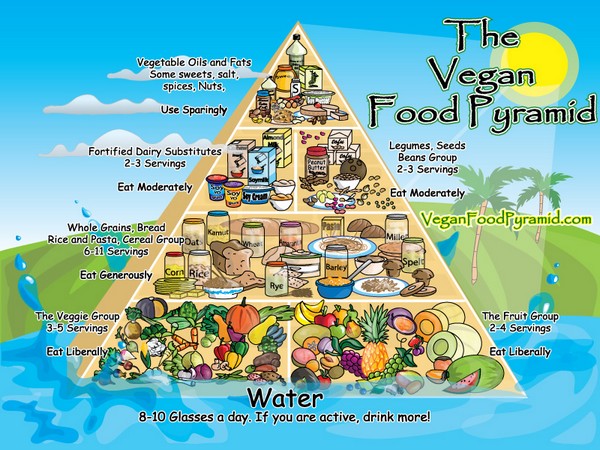