Organic sandwiches to take out! 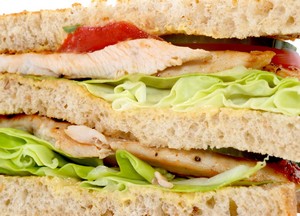 It’s not often we buy a takeaway sandwich. I’ve often thought of them as a waste of money for crap food.

However, I’ve just come across a company called Fresh! Organic who sell organic sandwiches, made by humans. Yes PEOPLE actually make their food!

You can buy them in Boots stores across the country and Asda, Tesco and Sainsbury’s stores within the M25.

I’m impressed with the packaging, which is another reason I rarely buy a sandwich. Instead of plastic, these come in FSC certified cardboard, which is compostable and the plastic film window is made from cornstarch. So the whole lot can go in your compost bin.

They cater for food allergies with a range of sandwiches on rye bread and stock salads too.

Every month, they launch a mysterious sandwich of the month in limited edition packaging. This month it’s “Taurus” with beef, mozzarella, red onion, and pesto on wholegrain bread.

For kids, they sell a range of mini sandwiches which are half the size of an adult portion. This is great for kids who love to eat like us, but have tiny tummies.

For ‘fast food’ these sandwiches definiately get my vote