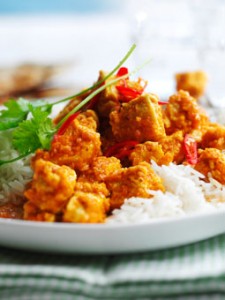 In my teens I became a vegetarian. My reasons were to do with animal welfare; it certainly wasn’t because I didn’t like the taste or texture of meat.

I had little culinary experience so my diet became pretty unbalanced and unhealthy – all I did was cut out meat and not bother replacing it with anything nutritious. And I have to be honest, in the first two or three years I used to sneak a beef curry into my diet when no-one was looking!Then I left home and had to fend for myself so I started to take more interest in what I was eating; especially as I was buying and preparing the food myself.

It was then that I discovered Quorn products and TVP, and I have to say I never looked back.

Back then you could buy Quorn as mince or pieces and I used both regularly. My favourite dishes were sweet and sour or spaghetti bolognase. The TVP I used for stroganoff or shepherds pie. Even my ‘meat and two veg’ brother used to turn up at my house at tea time eager to be fed my new found kitchen heroes!

I’ve not eaten Quorn for some time because I tend to use more pulses and lentils now, but recently Little Miss Green tried their sausages and loved them more than their meaty cousins. She also tried their ham substitute which went down a storm (and I was delighted with because I’m never happy about the additives used in ham products).

With food prices increasing, one of the easiest things to do is make meat go further by packing it out with oats, lentils or barley and this week I decided to put Quorn to the test again. Mr Green, when he’s not on his high raw diet, does still eat a lot of meat and because we buy from a local supplier with welfare top of the list, it’s pretty expensive. I wanted to see if I could convince him that a vegetarian recipe made with Quorn could taste as good as chicken, so I set to work making his favourite – Quorn tikka masalla.

The recipe was simple to make, quick and apart from Tikka Masala paste, I had everything at home already. All you do is marinade the Quorn, fry the onions and peppers, throw in the Quorn and simmer in stock. I prefer to make dishes like this the night before we want them to really allow the flavours to develop.

Well, if an empty plate, and cries of ‘is there any more?’ is anything to go by, I think we have a winner!

What about you – have you used Quorn or any other meat substitute? What are your favourite recipes?