Which is better, local meat or global lentils? 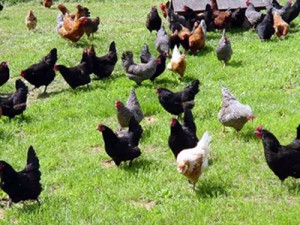 For day 20 of our carbon fast we were asked to stop eating meat for the day.

The suggestion read “Don’t eat any meat today, and see if you can cut down on the amount of meat you eat each week. Meat production has a large carbon footprint, with 2.2 pounds of beef producing the equivalent amount of CO2 as an average European car driving 155 miles. It takes 2500 gallons of water and many pounds of grain to make one pound of beef for your table.”

Ok, well here goes with something that has been on my mind for a LONG time.

I’ve been a vegetarian for over 20 years. I gave up eating meat when my rabbit died! I had been reading articles about intensive animal farming and was feeling more and more moved by what I saw. I also felt a bit hypocritical because I realised I was ok eating meat as long as I never had to deal with it – ya know, kill and gut something in order to eat … As long as I could pick it up in pretty packaging from a supermarket chiller and it was unrecognisable from being a dead animal, I’d eat it.

I had zilch awareness of the environment at that point, but I was an animal lover. So, in honour of Benjamin the bunny I gave up eating meat in my late teens.

Over the years I dabbled in veganism, added fish again, took it back out, switched to high organic food and became more aware of the environmental impacts of my diet.

I started growing a little veg in the garden, looked for as much local produce as I could and became interested in eating with the seasons. Most of us in the Western world are pretty much removed from the roots of our food. We eat strawberries in December, root crops through the summer months and foods from all over the world at any time of day.

Over the past few years I’ve started to become more interested in rubbish. Yeah, I know, go figure! We’ve reduced our landfill waste to almost zero and I have become more aware of the dreadful packaging we use for many foods.

Mr and Little Miss Green eat meat and I can go to a local butcher (thus keeping my money in the local economy) and buy anything I want without packaging at all. I take my own reusable containers and the butcher fills them with my purchases. I began comparing this to my own lentils and rice – they come in non recyclable packaging from the other side of the world. Meat comes from less than 5 miles away with zero packaging…

You can see where I’m going, right?

I’ve been mulling over this for a few months, feeling increasingly uncomfortable and unsure about the whole thing. I kind of gave up and let it up to the Universe to take care of. Well, the Universe did indeed intervene and a month or so ago I was in my wonderful local, organic shop where the owner told me he had a new supplier for chicken. It was free range, organic, humanely slaughtered, and the farm was less than 10 miles away. What’s more, he knew how I felt about packaging and they could pack what I wanted in polythene bags for me to recycle.

To cut a longish story short, I’ve been reintroducing chicken into my diet after 20 years. I started with less than a teaspoon of meat with the rest of my meal but now eat about 1/3 of a chicken breast in one go.

Do I feel any different? Surprisingly not; not at all. But I’m happy with my choice and feel it is better for the environment for me to eat local, organic chicken without packaging than it is for me to import lentils from thousands of miles away wrapped in plastic…

Have you made a life changing decision recently that challenged something you have believed in for a  long time?