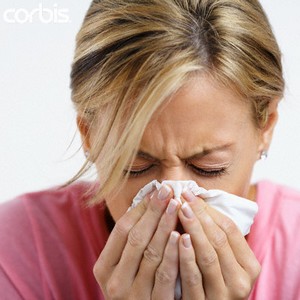 I’ve had hayfever since I was 7. Back then I took various antihistamines, steroids, eye drops and nasal sprays. The toxic drugs were awful; they may well have reduced the symptoms, but they made me feel like a zombie and I hate to think about what all those chemicals did to my little liver.

As I grew older I looked for more alternative, natural ways to cope with hayfever, such as change of diet, herbs, essential oils, homeopathy, reiki and even trying to look at any deep beliefs that might be supporting an ‘I’m a hayfever sufferer’ mentality.

This year I was challenged to try something different by Andrew Broch. Andrew is the inventor of the Qu-chi Acupressure Band; which is based on Acupressure (that’s acupuncture without the scary needles).

He sent me a funky looking band to wear around my arm. Positioned correctly, the band exerts gentle pressure on a specific acupuncture point known as Qu-Chi (pronounced kyoo- chee). Stimulating this point has been shown to reduce your sensitivity to external pathogens.

My pattern over the past few years with hayfever, means that June is the worst season. Andrew advised me to wear the band in advance to my known ‘hayfever season’ and I’ve been wearing it for the past month, day and night.

My hayfever symptoms are (in order of severity, frustration and desire to get rid of):

At the end of the first week of using the Qu Chi band, I’d noticed some significant changes. Bear in mind that I’ve had hayfever for 30 years and nothing has done much to relieve the symptoms. 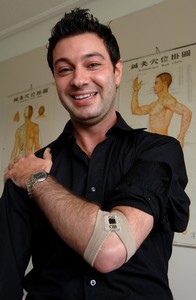 By the end of the first week my eyes had not been itchy once – this was amazing. Usually by now I look permanently drunk, the skin around my eyes is sore to the touch, the area underneath my eyes hangs like saddlebags and I spend most of the time with itchy eyes.

Make up is a no-no and this week I even managed to wear eye liner a couple of times with no ill effects! Yee ha!

I haven’t had a sneezing fit. Well, actually I had one. We were out in the car; it was hot, the windows were open and I sneezed violently about 15 times in a row. But you know the amazing thing? I got home, and there on the side of the bath was the Qu Chi band! I’d taken it off when having a wash and forgotten to put it back on again. I was very impressed with that.

The itching in my eustacian tubes and throat is there, but so far not as bad as previous years.

The one symptom that remains, although to a lesser degree, is the blocked nose at night. Unfortunately, this is still preventing me from sleeping, which is the main thing I was hoping would change. By the middle of June I’m totally worn out as I wake up every hour throughout the night.

But to be honest, if my days are more comfortable, and I don’t have to contend with the sore eyes and tiring sneezing fits as well, then I just might be able to manage. And, to be fair, one evening this week we had a friend to visit and I didn’t go to bed until 1am. I slept all the way through ’til 5am, so that was nice. (but ya know, 4 hours sleep, isn’t really enough, even for me!)

I’ll report back next week and let you know how I’m getting on!

I would love to trial the band on its own to see what changes it can help with; in order to give a very objective review, but to be honest, when you get to this stage, you just want the symptoms to be gone.

So far so good though, with an estimated 60% reduction in severity of symptoms by using the Qu Chi band, this is getting the thumbs up from me.

What about you? Have you used an acupressure band for hayfever – how did you get on?