How to dilute and use hydrogen peroxide 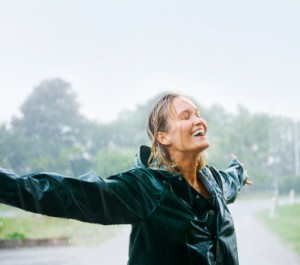 One of the items in our natural first aid kit is hydrogen peroxide (H202).

Hydrogen peroxide occurs naturally – when moisture (H20) interacts with ozone (03) in the atmosphere, it picks up an added oxygen atom and falls to the earth as rain which contains an abundance of H202. And we all know how fresh and clean the air feels after rainfall!

In fact Hydrogen peroxide is found in the cells of the body where it acts as a major defence in the immune system. In healthy people, H202 is produced in sufficient quantity to counteract unwanted bacterial invaders. Growths in the body such as yeasts and viruses are often anaerobic, so the extra atom of oxygen in hydrogen peroxide slows down or even stops their spread.

Hydrogen peroxide has been used as a remedy for people with virus and yeast-related diseases for years and respected medical professionals who have benefited from H202 recommend it highly.

Like all good things in life, too much isn’t a good idea. Excessive intake may inhibit enzyme systems and ignite a rush of free radicals that adversely affect immunity and damage certain cellular structures. In addition, people with organ transplants should not use hydrogen peroxide because it may boost immunity sufficiently to override the immune-suppressing drugs these people take to prevent rejection of the transplant.

However, when used according to suggested guidelines, H202 is not only safe, but effective and healing.

Standard over-the-counter 3% hydrogen peroxide is not recommended for internal use or even used as mouthwash because it contains a number of chemical stabilisers. Use a food grade H202 and dilute it down to 3% with spring water or aloe vera juice. If you spill H202 concentrate on your skin, flush immediately with water and avoid any contact with eyes. Keep out of the reach of children too as full strength H202 can be toxic if swallowed.

There is no substitute for a good diet if you have candida overgrowth but hydrogen peroxide can be taken in conjunction with an anti-candida diet to boost health.

Begin with one drop of diluted H202 a day for the first week. Then increase to one drop three times a day, and every three days add one more drop per dose until a level of about fifteen drops three times a day is reached.

Healing reactions can be extreme as H202 encourages your body to detox, so take it slowly. If a reaction occurs either slow down the increase of drops of stop for a few days before resuming at the number of daily drops you got to.

After symptoms subside, a maintenance dose of five to fifteen drops weekly (one to three drops a day for five days a week) may be needed.

Animals with arthritis and worms often respond well to H202.  Add two drops of 35% H202 to drinking water daily for a ten-pound animal and adjust the dosage according to weight for other animals.

To remove pesticides and parasites from the surface of fruits and vegetables, soak them for 20 minutes in a sink full of water to which ‘/4 cup 3%  H202 is added.

It’s fine to use over-the-counter 3% Hydrogen peroxide for most external applications. Your house plants will love it too!

Soak feet in 3% H202 once daily at night. Be aware that Athlete’s foot often indicates an internal yeast condition so you may need to make diet and lifestyle changes too.

For acne or ringworm, dab 3% Hydrogen Peroxide on with a cotton ball; avoid getting in eyes.

Spray or water house plants with a solution of one ounce of 3% HP to a quart of water.

For minor cuts, soak the wound in 3% hydrogen peroxide to aid healing

What about you – do you use hydrogen peroxide at home?