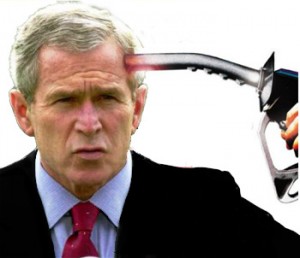 You know you’re in for an alternative night’s entertainment when you hear oil described as “the excrement of the devil”.

Released in November 2007, “A Crude Awakening“, directed by Ray McCormack and Basil Gelpke is a 90 minute documentary about the planet’s dwindling oil supply.

The films ‘cast’ is made up of experts from the petroleum industry including former ministers for oil and former CEOs of oil companies. The conclusion reached by all is that our industrial society and current Western lifestyle, built on cheap and readily available oil, needs to change quickly if we are to avoid catastrophic events.

“A Crude Awakening” focuses on ‘peak oil’ – the point where demand overtakes supply. Depending on who you listen to, it looks like we have reached this point already, or will reach it in the next 20 years. This will result in large price increases at best and world war at worst. It will certainly change the lifestyle we have all become accustomed to over the past 100 years.

The film states that oil is a magnet for war. It links dwindling oil supplies with America’s current obsessions with the Middle East, the ongoing war in Iraq and the nuclear ambitions of Iran and finishes without a glimmer of hope.

They touch briefly on alternative energies – wind; erratic and not enough, hydrogen; uses 6 barrels of oil to produce the equivalent energy of 1 barrel, solar; the best option but too [amazon-product align=”right” small=”1″]B0011W2IL0[/amazon-product]expensive and it’s clear that there is no simple answer.

Apparently the film makers chose their ending deliberately. They don’t want us to blindly believe that we will be saved by some wonderful technology which will let us off the hook. The message is not to scare people, but it serves to wake us up and get us thinking about what the future might hold.

It is clear from watching the film that although the people who make decisions are aware of the situation no significant changes are going to take place on a global level. There is still money to be made from oil, (in no film is that made more clear than ‘Who killed the electric car’) and let’s face it, if there are 20 – 30 years left, most of the people in power will be dead and the situation will no longer concern them.

There appears to be no looking to the future in a positive light, unlike Al Gore’s “An inconvenient truth” and it shows you just how dependent on oil we all are. It’s clear we are moving from an era of abundant, cheap, easy to get energy to an era of scarce, hard to get, expensive energy.

Oil is our God

As a startling quote reads “Oil is our God. I don’t care someone says they worship Jesus, Buddha, Alaha or whatever. They actually worship Oil”.

I must admit, after watching it, it made me think about ways in which I could personally reduce the dependency on oil in my own life. Subsequently I revisited a page I wrote about the ‘independence challenge‘ to see what changes I could make.

What about you – have you watched ‘A crude awakening’? Are you making plans to reduce your dependency on oil or do you believe there is a renewable, sustainable answer which will enable us to ‘carry on as before’?