Aquapax – the most ecologically sourced water 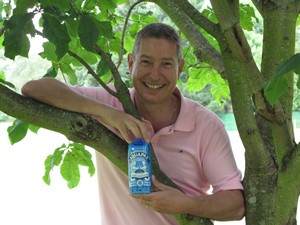 A few months ago, I came across Aquapax pure mineral water. It’s the champagne of ‘bottled’ waters, only it doesn’t come in a bottle, it comes in a tetra pak carton!

I must admit, my first thought at putting water in a tetra pak was why? Plastic is ok (well it’s not ok from a health perspective, but it works), so is glass, so why opt for paper board? Why reinvent the wheel? There was only one way to find out, so I spent a long time talking to Neil, founder of Aquapax, to discover his fascinating story.

Neil never originally set out to launch a bottled water company at all. His intention was to package tap water and have it stored for emergencies in order to save lives. This vision came about in 2004 when Neil watched the tragic Indian Ocean tsunami unfold on TV. Neil was so moved by the tsunami and the plight of the people that he began writing his business plan immediately, resigning from his job as a Director of a water board the following year to try and help.

Taking all that he learned in his job, Neil knew that plastic was an unsuitable container for water because plastics allow leaching into the water. Glass, although safe for storing water, is far too heavy to transport. Neil hit on the idea of Tetra Pak cartons. Cartons are light weight, keep out light and air – thus keeping water protected from bacterial growth – and can safely be refilled and reused.

His idea was that the water would be drunk to rehydrate victims of flood, emergency or natural disasters and the empty carton could then be used as a fuel for cooking because it burns like coal. However, the aid agencies would not trade with Aquapax because Neil did not have three years trading business history …

Neil had resigned from his job and needed money to support his family so he decided to start packaging water for consumers instead. Fuelled by his passion to make a difference to the world and to provide the purest water available, Neil wanted to deliver consumers the most ecologically sound water he could.

He eventually found the purity of water he was looking for; under a nature reserve in Germany!

Neil felt stumped by this – how could he, in all conscience, market an ecologically sound water if it was imported from Germany?

Neil contacted the ethical carbon balancing company, C level. They pointed out that even if you import the water from Germany, putting it into tetra pak containers was still a sensible ecological concept COMPARED TO THE ALTERNATIVES of plastic and glass.

Take a plastic bottle for instance – the oil to make the plastic is drilled from an oil well in the middle east and 2 1/2 litres of water are required to make just one empty bottle! So by looking closer, you will find that your English water, sold in plastic or glass, has an overall carbon footprint BIGGER than that of Aquapax water.

Neil urges people to refill and reuse his empty AQUAPAX; his packaging even carries that message to consumers and his water is manufactured in as carbon sensitive way as it can be, with the factory located in a nature reserve and powered by natural bio-gas. Sure it makes it more expensive (RRP is 79p each for 500ml), but often the most ethical and healthy options are. Sometimes we quite literally have to put our money where our mouth is and as Neil points out, the Government makes more in VAT on each AQUAPAX sold at 79p than his company makes in gross profit BEFORE expenses.

Neil believes this is one of the purest natural mineral waters in the world, sourced and packaged in the most ecologically sound ways.
What makes one water purer than another? More on that another day.