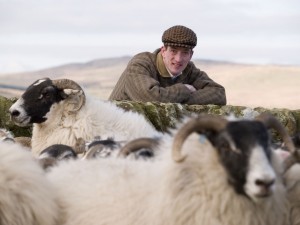 Living a ‘green’ lifestyle is a holistic lifestyle. As well as taking care of the earth, we take care of ourselves which includes taking responsibility for our health.

That means eating healthy food, getting the right amount of exercise and rest and reducing stress. As far as I’m concerned all these aspects of life are intertwined.

Although the jury is still out on whether or not the ‘greenest’ diet is a meat free one, it’s getting more and more challenging to find good quality meat for those who choose to eat it. So much so I stopped eating meat for 20 years. With all the antibiotics, growth hormones and intensive farming around I found it morally impossible to vote for that with my money plus I didn’t want MY health adversely affected by my food choices.

Recently however, I’ve found a local, organic farm who sell humanely reared and slaughtered chickens and I’ve reintroduced meat to my diet.

This week we were invited to try some mutton from the Blackface Meat Company. Mutton is a meat I’ve never considered buying. To me it means a strong tasting, ‘old’, tough meat so I was interested to put my assumptions to one side and try it out. They promised to send me some recipes so I could get the most out of the box; which was great as I wouldn’t have had a clue what to do with it!

The Blackface meat company is a small family business, rearing Blackface sheep and Galloway cattle in the South West of Scotland. The company promotes an idyllic image and claim “Seasonal, well hung meat with unmatched flavour”. According to the site they believe passionately in the link between a healthy landscape and the highest quality meat.

Blackface sell a wide range of oven-ready game from selected Scottish estates, slow grown ‘Iron Age’ pork and Christmas turkeys all over the UK. They are long term, trusted suppliers to some of London’s best-loved restaurants and their meat has won numerous awards.

I get the sense that everything on the farm is done with reverence and the knowledge that nature doesn’t rush a good thing!

They claim that due to their sheep living on the heather, wild mosses, blaeberries and grasses, the meat is tinted a deep red and you can clearly taste the herby flavours of wild plants”. What’s not to love!

I eagerly awaited my box containing two 500gm packs of diced mutton and one mutton hock.

Taking receipt of the box of meat

Unfortunately, things did not run smoothly at the beginning.

The meat was delivered at 11am on Thursday morning. Mr Green took delivery of it and I wasn’t aware it had arrived. Three minutes later I walked downstairs and wondered what the strange smell in my home was. Then I saw the meat delivery!

I could smell the meat through a sealed box.

I opened it up and it had been packed in thin polystyrene inside a cardboard box. The meat was on the bottom, covered with a thick layer of shredded paper and on the top was a freezer pack. The freezer pack was completely defrosted and the meat was at room temperature. One pack had been leaking and blood had seeped into the polystyrene.

I called their office straight away but there was no response, so I left a message on their answerphone.

Within half an hour I received a call back and was told the meat was butchered on Tuesdday (2nd August) and sent to me chilled at 4pm on Wednesday (3rd August). She said the pack had not been leaking when sent out. It had taken 19 hours to arrive, which isn’t surprising considering we are at apposite ends of the country, but the meat was not sent in a chilled van! Wednesday was one of the hottest days this summer and even the evening was hot and stuffy…

The lady I spoke to said “If you’re not happy to cook it, then that’s fine but I would be confident it would be alright”.

Being confident something is ok is good enough for me, so I checked out the recipes she had sent me and couldn’t wait to get stuck in.

There was a delicious and easy sounding tagnine where everything is shoved in the oven and forgotten about for a few hours and a quirky sounding recipe where you cook the meat in a bed of hay.

I decided to use the meat that needed using first so went to check the dates. Bearing in mind it was 4th August when I took receipt of the goods, the packing date for each product was 2nd July and the Use by date was 16th July for the diced mutton and 12th July for the half leg!

I phoned the office straight away, they checked the labelling machine and confirmed that it had been set wrongly. Apparently there had been a few problems with it on the day the meat was packed and the orders had all been sent out with the wrong dates on it. I was reassured the meat was butchered on Tuesday. I mentioned about the difference in Use By dates – to be honest I didn’t understand it, but figured it might be something to do with having the bone in the meat.

We’re all human and we all make mistakes. I don’t mind that at all and I don’t knock a company for making mistakes. What’s important to me is the way a company deals with a mistake or complaint. On each call the lady remained polite, confident in what she was saying and gave me reassuring information with explanations along the way. Although it was glossed over about the pack that went in perfect and arrived leaking – the box was not damaged, so there was no explanation for that – everything else was dealt with.

The recipe was simplicity itself – it is a one pot meal that requires little preparation. The meal is ready to cook within 5 minutes and you can walk away and leave it simmering for 3 hours – perfect! You can see below what to do:

In a tagine or heavy bottomed lidded casserole you put, in the following order:

That’s it! Pile in the ingredients, put on the lid, switch the heat on and leave to simmer for 3 hours.

Blackface recommend serving the stew with mashed potatoes and say it’s excellent reheated the next day.

So what did Mr Green think?

And Little Miss Green (who had been out that day and already eaten her dinner)?

A definite thumbs up then! The next day they both ate the leftovers with some freshly baked bread and it got the thumbs up again although they both preferred it fresh to reheated.

At the weekend I make a traditional Sunday Lunch. We usually eat chicken or beef. This week, however I tried another recipe recommended by Blackface “Slow-roasted Mutton With Woody Herbs, Meadow Hay and Butter”. Yep, you read that right – hay!

At first I thought this was some exiting energy-saving method; I thought I was going to be making a hay box! Alas it was for making a bed to cook the meat in. My research gave me several possible reasons for using hay in cooking:

I also read a rather terrifying anecdote that the spontaneous combustion temperature for hay is somewhere around 175 degrees! I guess packing it carefully in foil limits setting the house on fire!

For this recipe you need to make lots of garlic butter – I used a whole pack of butter and 2 heads of garlic. This is used to rub over the leg of mutton.

You then line a roasting tin with aluminium foil and make a bed of hay and fresh rosemary, thyme, marjoram and oregano. You put the mutton onto the hay and cover with more hay and herbs before bringing the foil around and pinching together to seal. (Fortunately we have a pet rabbit who was only too happy to give us some hay in exchange for some of the herbs we picked 😉 but a local farmer or even pet shop should be able to help you out if you’re out of hay in your pantry).

You then make a gravy by sieving the juices from the pan and heating with 600 mls of lamb stock.

Well this was a total disaster. After following the recipe to the letter I went to carve the meat and cold blood ran out of it. Mr Green isn’t shy of ‘rare’ meat, but raw? No thanks.

Needless to say Sunday lunch was a few hours late and to be honest, as a family who eat healthy food this was just too much to bear. All that butter, all that fat! I ended up with a roasting tin full of fat and butter-infused hay which had to be landfilled as I couldn’t safely compost it. With awareness now on health I felt like we were at some Mediaeval banquet; it simply wasn’t for us – the only meat I eat is skinless, boneless chicken so you can imagine how I felt about eating this.

That’s not the fault of Blackface, of course, I should have thought about the recipe a bit more and decided in advance it wouldn’t suit our palate…

Fortunately we have several elder friends who love traditional cooking. An impromptu ‘Monday lunch’ soon took care of the leftovers…

Despite some teething problems, Blackface soon redeemed themselves with quick and courteous explanations and confident reassurance that the meat was fit to eat. Indeed it was and Mr and Little Miss Green were amazed at how good the Moroccan stew tasted. They gave it a big thumbs up for both taste and texture.

You certainly get what you pay for – there’s no ‘two for a fiver’ with Blackface – the meat I was sent was worth £35 and it’s not surprising. Their mutton is five years old and is reared as nature intended. Altogether we would have got about 18 meal portions worth from this, so it’s around £2 per meal for good quality meat.

To be able to get overnight delivery is amazing, but I feel that refrigerated vans should be used, at least during the summer months.

I found it difficult to navigate my way around the website to find the meat I wanted, but have no doubt that had I needed help, one of their friendly staff would have helped me place an order by telephone.

Disclaimer: I was sent a box of two packs of diced mutton and half a leg along with cooking recipes in exchange for this review.